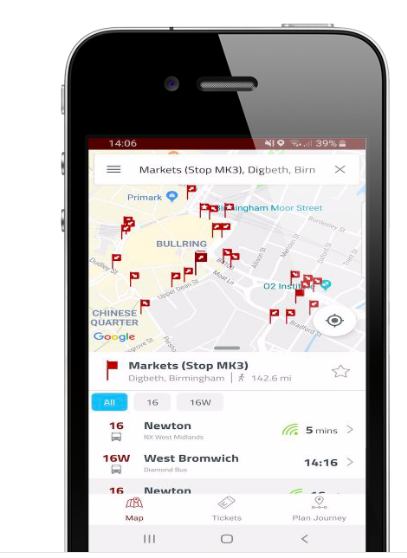 When National Express West Midlands (NXWM) asked for feedback about the provision of their Real Time Information (RTI) on mobile devices, users said that they wanted richer features, beyond the industry-standard of showing live departures for a bus stop. Key items on the wish list were seeing real time movements of buses on a map, and retrieving live departures for multiple nearby bus stops at once.

TransportAPI worked with NXWM to define precise requirements, and scoped the feasibility of delivering the required features against available data sources. It was clear that a timely response could not be provided by polling upstream sources: TransportAPI would need all the necessary data available in their own internal database.

“Stops, maps and tickets all in one place! A great update… no more separate apps for tickets and tracking the buses. Super easy, much faster and I can actually see the buses moving on the map!” Vinspireduk on the app store

TransportAPI developed a robust infrastructure for ingesting live SIRI Vehicle Monitoring(VM)messages directly. Each message describes the location of a moving bus, along with timestamps and referencing fields saying what service this is, and the specific journey that it is traversing; buses send updated messages every few seconds. To transform these messages into RTI predictions for bus stops and services, they must be cross-referenced against a journey schedule that lists the stops at which this bus is supposed to call, and at what time.

Within the transport industry, multiple referencing systems for identifying bus operators, services, journeys and stops co-exist, and transforming between them is often non-trivial. In this case the referencing systems used by the live SIRI VM feed were not compatible with those adopted by the national dataset of bus schedules. TransportAPI therefore imported all of NXMW’s own schedule data, in TransXChange format, which provided a stepping stone between the live movements and national schedules.

With the data sources in place, and algorithms developed to predict departure times, TransportAPI’s endpoints could serve richer information – beyond stop predictions – including bus locations, and other live status information. A single request and response could package up collectionsof stops and services, thereby meeting requirements to display all of the moving buses for a particular service, and all live departures for multiple nearby stops.

A suite of tools was developed that could report upon and monitor data quality: this assisted in highlighting problems with input data, which could then be addressed at source. Working with mobile app developers, new apps were designed that created a more compelling user experience, and allowed passengers to make better decisions when traversing the public transport network. 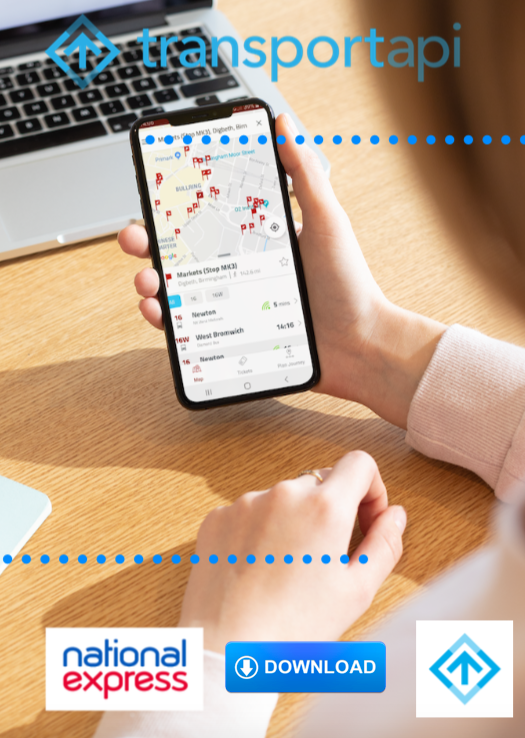