IBM held a “datapalooza” event at skills matter last month. This was during the wimbledon tournament (before Andy Murray had taken the title!) and the event was a mashup of various data related things in and around the IBM ecosystem, with a wimbledon spin on it!

I was invited to show TransportAPI and so talked through a demonstration of some of the API’s capabilities with this set of links:

In general the TransportAPI documentation is at developer.transportapi.com, but here are some quick examples

We can find the lat lon values for example by using the address bar on the OpenStreetMap.org homepage

See the nearby bus stops on a map

The next 493 timetabled bus departure:
http://transportapi.com/v3/uk/bus/route/LONDONBUS/493/outbound/490016252N/timetable.json?app_id=YOURAPPID&app_key=YOURAPPKEY

See that on a map

Example display of journey plan data: Get me to Bournemouth!

I’ll just leave this as a simple list of URLs, which was basically how I presented it, since TransportAPI is just a nice simple RESTful API. I was talking through a series of URLs (and showing a series of screens full of JSON formatted data). 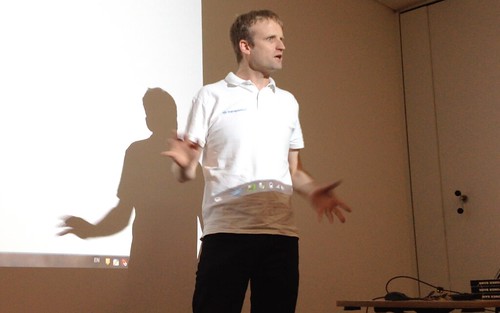 This audience were mostly the kind of people who will look at a screen full of data and see the possibilities leaping out at them! If you’re one of these people, then hopefully the above will give you some interesting ideas or starting points for using our API.

We also showed how TransportAPI has been mashed into various demos of IBM bluemix recently following on from the SmarterTravel Hackathon demo we did previously. This time Dan set up a NodeJS start app to demonstrate deploying to bluemix with an app integrated with TransportAPI. If you fancy trying out IBM Bluemix, you can register and then deploy this with one click. Of course TransportAPI can be used independently of IBM bluemix but this seems like an neat way to get started with that particular technology combo.

Obviously my wimbledon connection was a little tenuous here. The most wimbledonish thing at the event was the IBM team who run the stats reporting for the live tennis commentary. You may remember seeing an “IBM” logo on the TV after it reports on the number of “double-faults” and “unforced errors” the players are making. They were showing this, and also a fun virtual reality view of the stats counting room overlooking centre-court.

Thanks to IBM for organising a fun wimbledontastic data event! They’ll be running more IBM events hosted at skills matter in the coming months.