This week is London Tree Week, and as part of this we’ve developed an iPhone/iPad app called “Tree Routes”. Get it on the apple App Store.

Find significant and important trees of London using the Capital’s famous tube and Overground map. Each station has a ‘must see’ tree associated with it. Find a Swamp Cyprus near St Pauls, rare wild Black Poplar in Angel, ash trees in White City and the Dickens’ Oak at Chigwell. 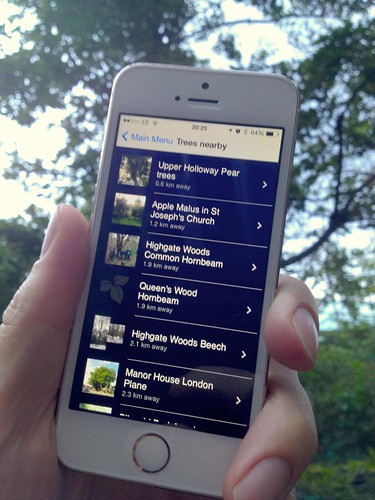 For London Tree Week the Mayor of London, is supporting various initiatives as part of his work to deliver 100,000 more trees in the capital and encourage people to get involved in fun and interesting projects.

We worked with the Greater London Authority to create this iPhone app which has data on a set of interesting London trees, presented in relation to tube stations. The data in this app comes from the Greater London Authority, London’s Boroughs and the Woodland Trust, with many individual contributions credited throughout. The tree identification guide is kindly provided by woodlands.co.uk.

Although we are increasingly focused on development of the more low-level systems of the transport API, we have undertaken projects to produce smartphone apps on several occasions.

The GLA team came to us with a spreadsheet listing interesting trees in London, and we worked with them to design and build this app from scratch. With a tight budget, we knew we had to go for something simple, but our transport interests were piqued by another idea they came with, to relate trees to nearby tube stations.

We brainstormed initially with rough sketches, before producing ‘wireframes’ for the different screens within the app, then bringing in a specialist designer, aviation partners, for the graphics and colour scheme. Several prototypes were shared with the client during development, to keep a tight feedback loop.

The interface for navigating the tube system, included a tube map, with clickable stations. This required us to define click zones, recording the coordinates of every station as it appears within the tube map image. The app also has some geo-intelligence, with several features powered by the latitude and longitude coordinates data of the trees and tube stations.

For the trees data we found we needed to do a lot of data cleaning. Spreadsheet entries were mismatching and formatted incorrectly in various ways, while the app required a more rigorously structured database. On the one hand we asked the client to make data fixes, and encouraged them to think in more structured database terms, but on the other hand we wanted to keep the data in the familiar environment of a spreadsheet for them, and enable them to make updates and additions to this. We developed data transformation and validation logic to achieve this.

The app also allows new tree photos to be added. We still have a quite a lot of entries without photos. This is something the client wanted to improve, and while they were taking responsibility for this, we couldn’t resist joining in with a mission to find and photograph some interesting trees around London. So in the short time we spent developing this app we started out with an interest in transport, and became increasingly interested in trees! Perhaps that’s a similar journey our app users will go on.

Get the Tree Routes app on the apple App Store.